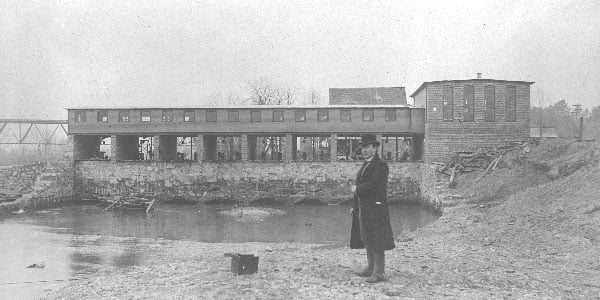 In 1898, Forsyth County, NC, was at the beginning of its manufacturing boon and it was the Idol’s Dam power station that made the light.  It was the first commercial hydroelectric generating station in North Carolina (just west of Clemmons on the Yadkin River) to provide long-distance transmission of alternating current.  Legendary inventor Thomas Edison was an early investor in the project.

The Idol’s Dam story began with Henry Elias Fries, whose family owned several textile mills and a grain mill, among other enterprises. Fries saw the potential of electricity and formed a company, Fries Manufacturing and Power Co., to put the power of the Yadkin River to work for the community.  The Idol’s station continued to generate power until a fire on Feb. 8, 1998, apparently caused by a mechanical failure in a generator.

Today, the power station is now a ruin.  The station’s wooden wheel room, which sat above a stone structure housing the turbines, was destroyed and the brick generator room gutted. The granite dam, exterior of the generator room and brick walls of the wheel pits remain. Early 20th-century machinery such as a flume, turbines and rotor now sit in the grass at the site.